Jordan is one of the driest countries in the world and faces a critical water issue. It is heavily dependent on groundwater resources, which constitute 57% of the supply. Groundwater is the main source of drinking water for the Kingdom and the main source of water for irrigation in the Highlands, while surface water is the main source for irrigation in the Jordan Valley. Renewable groundwater resources represent the major source of water supply. Water scarcity has led to significant competition between different sectors, mainly agriculture and drinking water. In 2010, 10 of the 12-groundwater basins in Jordan faced severe over-abstraction, sometimes at about twice their annual recharge rates (or safe-yield). Azraq basin is one of the most important groundwater basins in Jordan. It is located in the Northeastern part of Jordan. It extends northwards into Syria and southwards into Saudi Arabia. The Azraq Oasis (called locally Sabkhah or Qa’a Azraq) which is located in the central part of the basin is at a distance of about 122 km northeast of Amman. Qa’a Azraq is a relative large mudflat located in the central part of the basin. Two villages are located on the western side of the Qa’a Azraq, these are: Azraq Shishan and Azraq Drouz. A well field called AWSA was established north of Azraq Drouz Springs (northern springs) where about 15-20 million m3 per year (MCM/a) of water is pumped to the capital Amman for drinking purposes since 1982. Farmers in the area are using around 45 MCM/a. Therefore, the total abstraction from the basin is about 65 MCM/a (El-Naqa et al., 2007). Two groups of springs exist at the border of the Azraq Sabkhah; The Drouze springs and Shishan springs. The discharge of these springs was about 15 MCM/a before 1981. This quantity of water was in equilibrium with the water balance of the basin representing the steady state condition. The over-exploitation of groundwater aquifers in the basin was dramatically affected the discharge of these springs. Drouze springs dried completely in 1986 and the Shishan springs discharge was reduced by about 80%. The consequences of over-expolitation affected the ecosystem in the area and many of the rare birds and plants disappeared totally.

The large recharging area of the Azraq depression seems to have ensured enough water for the marches and springs of the Azraq oasis even in the driest climates in the past, which made the oasis a refugia for hominins and animals throughout the Pleistocene time.

Azraq Basin in general is a part of the limestone plateau in east Jordan. These flows overlie Tertiary rocks in the northern part of the catchment area. The youngest sediments in the Qaa’ consists of gravels and sands of fluviatile origin (NRA, 1992).The outcropping formations are, the Rijam and wadi Shallala in the central and eastern part of the basin, both of Eocene age. The northern part of the Azraq basin is dominated by Miocene to Pleistocene basalt whereas to the west and south by Rijam and Muwaqqar formations of late cretaceous- Early Tertiary age. Regional distribution of the outcropping geological formations is shown in Figure 1. The area as the whole of Jordan was effected by the transgressions and regressions that occurred during the time from Cenomanian until upper Eocene (NRA, 1992). These transgressions and regressions are represented in the Azraq Basin by the changes of facies in the Ajlun Group (limestone, dolomite, marl, shale and dolomitic limestone) and Belqa Group (marl,limestone ,chert, silicified, limestone, dolomite and chalk),that crop out in the central, western and southern part of the basin. During the period from upper Oligocene and into the lower Miocene, the Azraq Basin has gone under erosion and tectonic activity,(Bender, 1974). In the Azraq playa (wetland reserve), the basalt is missing. Upper Tertiary sediments (B5) (Wadi Shallala) are located in the structural depression zones. The (B5) Formation consists of Marly Clayey layers in the area of AWSA well field and acts here as an aquitard between the B4 (Rijam) and the Basalt aquifer. Towards the southeast, the B5 Formation contains more sandy layers and it is classified as an aquifer in this area. South of the basalt areas Paleocene and Eocene,marly limestone, chalks, and chalky limestone with chert layers of the B4 formation, dominate the landscape. The B4 formation is underlain by the Maastrichtian B3 (Muwaqqar) formation. B3 formation reaches a thickness of about 300 m and consists of marl and marly limestone with some gypsum and evaporite. The underlying Campanian to Turonian B2/A7 formations (Amman/Wadi Sir) is mainly formed by chert and limestone, (El Naqa, 2010). 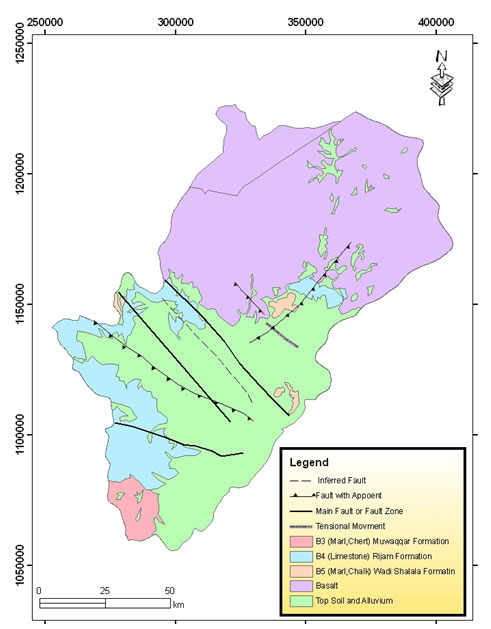 The groundwater in the Azraq Basin is found in different aquifer systems ranging from recent deposits to deep sandstone aquifer complexes:

Groundwater in Azraq has been used since the early 1960s by several sectors for different purposes: domestic, industrial, agriculture and environmental use. Groundwater in the Azraq Basin is a major source for drinking water for the cities of Amman, Irbid and Zarqa as well as the Azraq area itself. Via a series of well-fields, the government abstracts about 23 Mm3 of groundwater from the Azraq Basin every year for drinking purposes. Irrigated agriculture is the major consumer of water in the basin with an estimated abstraction volume of 28 Mm3 of water per year, nearly the equivalent of the basin’s safe yield (24 Mm3 per year). Modern groundwater-fed agriculture was developed in the 1970s with the introduction of the diesel engine and the availability of modern irrigation techniques such as drip and sprinkler irrigation systems. Before that, users depended on traditional surface irrigation techniques and traditional shallow wells with low abstraction rates for subsistence agriculture. Modern irrigation techniques first spread in the Jordan Valley when agriculture was still incipient in the Highlands (especially Azraq). When modern irrigation techniques extended to the Highlands, well-drilling techniques had also improved and energy costs had been lowered, while land was cheap and easy to access and water quality was still good. All these factors helped make agriculture the first investment option in Azraq. Such expansion was also fueled by the government who freely awarded licenses for wells in the 1980s and early 1990s causing agriculture to dramatically expand in the Highlands.

The Ministry of Water and Irrigation (MWI) is the official body responsible for the overall monitoring of the water sector, water supply and wastewater system and the related projects, planning and management, the formulation of national water strategies and policies, research and development, information systems and procurement of financial resources. Its role also includes the provision of centralized water related data, standardization and consolidation of data. Since its establishment in 1992, the Ministry of Water and Irrigation MWI embraces the two most important entities dealing with water in Jordan: a) the Water Authority of Jordan (WAJ) that is a financially and administratively autonomous body, established in 1988 under the Water Authority Law No.18, with the full responsibility of carrying out water and wastewater projects in Jordan; b) the Jordan Valley Authority (JVA) which is responsible for the socio-economic development of the Jordan Rift Valley (north and south of the Dead Sea), including water resources development, management, distribution of irrigation water, land reclamation and development, tourism development and environmental improvement and protection. JVA is mandated to plan, design, construct, operate and maintain irrigation projects, dams and hydroelectric power stations in the Valley.

Three main types of land ownership are to be found in Azraq. First, owned by the state (miri). State lands are officially under the custody of the state but are traditionally known to be 'owned' and claimed by tribes, but without a legal deed from the Department of Land and Survey. Second, the land settlement procedure largely follows the land settlement rules carried out by the British between 1930 and 1950, and later enshrined in the 1952 Land and Water Settlement Law. A group of persons can request the opening of a taswiye process, if they together claim an area of no less than 6 km2. The request is first reviewed by the Governorate and then by the Department of Land Survey (DLS), which checks the status of the claimed land and the conformity of the request, and forwards it to the prime minister for approval. The settlement must be announced in the newspapers and in public places and starts by a survey of the area and the attribution of numbers to all plots and hawds ('basins'), and by listing present persons using/claiming the land in a 'field book'. Third, the 'delegation' of land (tafwid) is ruled by Law No. 17 of 1974 and Law No. 53 of 1977. Individuals, private or public companies can rent state land from the government in order to build, cultivate or make a project on it. Would-be renters should present their project through an application directly to the DLS director. If the land is 'delegated' for agricultural purpose it should be rented for a minimum of five years before it may be registered legally under the beneficiary's name, although the latter cannot buy or sell it during the following ten years after its registration The maximum area that can be delegated varies according to the location of the land and can be up to 500 dunum in desert lands in the east. Tribes and settlers take advantage of this law to occupy land, reclaim and cultivate it, and then claim it officially.