The Coastal Aquifer of Comacchio (Italy)

The Coastal Aquifer of Comacchio (Italy)

The Comacchio aquifer pilot site is located in the coastal floodplain of the Po River in northern Italy, Emilia Romagna region, within the coastal area of Ferrara province. The pilot site extends for 1,055 km2, approximately 15 km north of Ravenna city. The area represents the eastern part of the Po River plain, including a Site of Community Importance (Habitats Directive) designed in 1995 by the European Union and named Comacchio Lagoons (https://econservation.jrc.ec.europa.eu/site/3661). The Comacchio area is a reclaimed land with flat topography below the mean sea level, and with an altitude ranging from 5 to 11 m above sea level (a.s.l.); the only topographic heights consist of dune systems, paleodunes and river banks. The surface hydrographic system includes the course of the Po River from where the water is derived by gravity, its tributaries and an extended hydrological network consisting of west-eastern-oriented channels and drainage ditches. The main water courses within the study Comacchio pilot site are Po di Goro, Po di Volano and Reno River plus a dense man-made network of ditches and channels more than 1,850 km long use to keep dry the land and managed by specific Reclamation Authorities.

Among the artificial channels, the Emiliano Romagnolo Channel is one of the most important Italian hydraulic works. It ensures, by means of derivation from the river Po, the water supply of an area covering over 3,000 km2, characterized by intense agricultural activity and widespread urban and industrial settlements and, on the other hand, poor in surface waters.

This area is characterized by intensive agriculture inland and intensive tourism along the coast during summer periods (June–September).

The geological setting of the Comacchio pilot site is characterized by a 700–800 m thick sedimentary sequence accumulated during the Pliocene-Pleistocene (Pieri and Groppi 1981; Castellarin et al. 1985). These sediments derived from two major depositional cycles of Quaternary age, Qm and Qc. They are marine and continental sediments accumulated in the Early to Middle Pleistocene age (Qm) and in the Middle Pleistocene–Holocene age (Qc) (Ricci Lucchi et al. 1982; Ori 1993; Regione Emilia-Romagna and ENI-AGIP 1998). In particular, these deposits are characterized by alternations and interdigitation of continental and marine facies accounting for the complex evolution history (Figure 1). In proximity of the coastline, fine sands and silty-sands are largely distributed, whereas silty-clay soils and soils rich in organic matter (peat) are present in the hinterland areas (Bondesan et al., 1995). The stratigraphic architecture of the Po Delta plain was controlled by eustatic and climatic fluctuations. Tectonic and compaction subsidence provided a significant contribution to the relative sea level and the spatial pattern of subsidence probably influenced the maximum transgression coastline configuration and the continental drainage network (Stefani & Vincenzi, 2005). 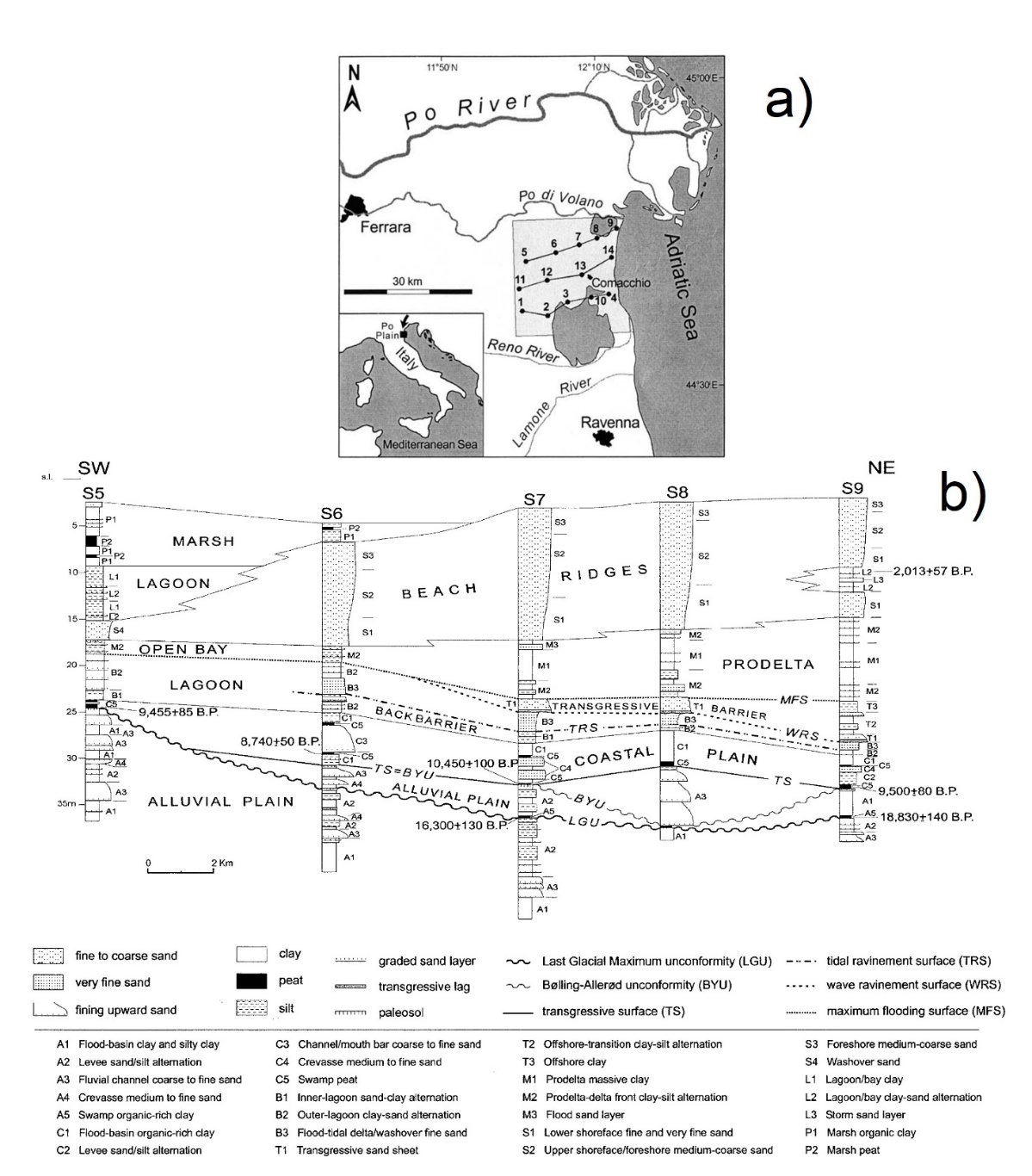 Figure 1 (a) Sheet 205 “Comacchio” of the Geological Map of Italy to scale 1:50,000 and localization of the section traces. (b) Stratigraphic correlation and architectural interpretation of the Late Quaternary deposits along the section trace 5-9 (from Amorosi et al. 2003).

The complex sediment deposition history of the Comacchio coastal area led to a complex hydrogeological setting. Three Plio-Pleistocene aquifer systems are found in Po aquifer systems: Aquifer Group A (from 0 to 150-200m), Aquifer Group B (from 150-200m up to 300-350m) and Aquifer Group C (more than 300-350m deep; Regione Emilia-Romagna and ENI-AGIP, 1998). These deposits correspond to fluvial and marine deposits, both with coarse and fine textures. The Aquifer Groups host different main aquifer complexes: e.g. Group A is made of A1, A2, A3, and A4 aquifers. The hydrogeology of the coastland is characterized by a multi-layered aquifer system confined between aquitards, where the sediments are related to the transgressive and regressive sea phases (Figure 2). A shallow unconfined aquifer is located above the multiaquifer system. Locally thin confining lenses of silt and clay sediments can be found within the shallow unconfined aquifer that is characterized by a thickness ranging between 2 and 24 m (Bonzi et al. 2010). 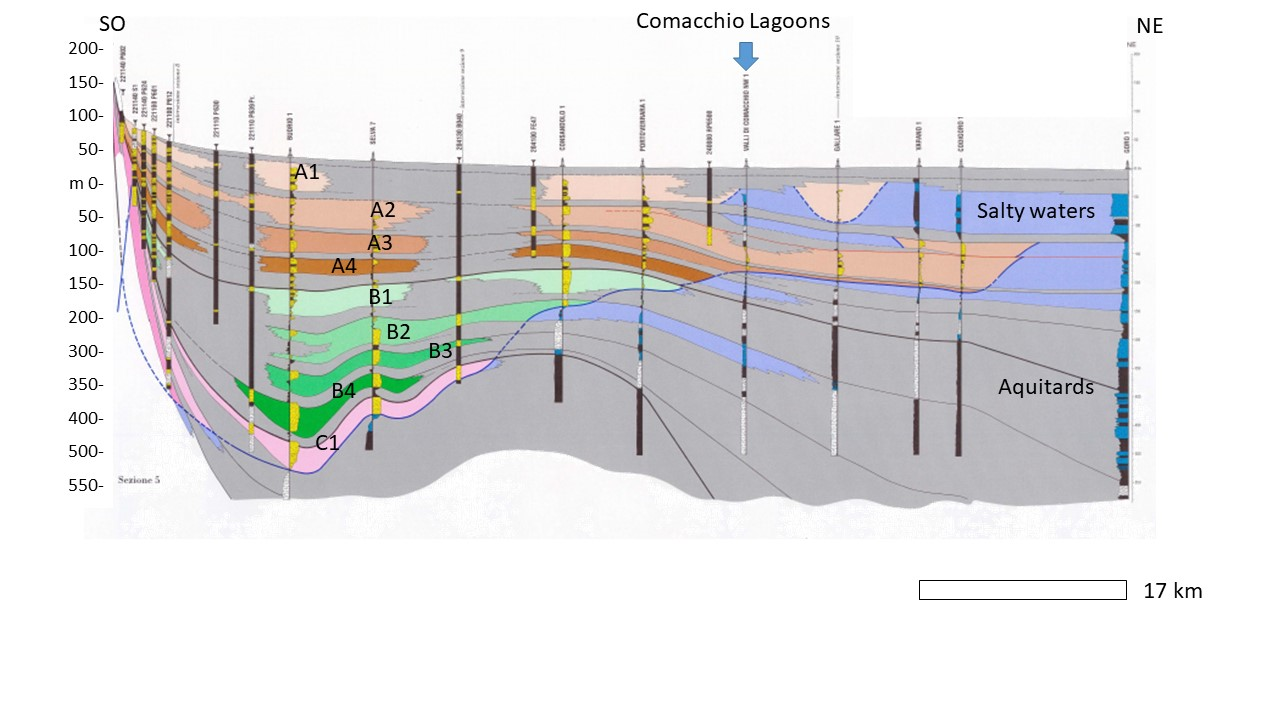